Aaaand I’ve reached 4000 views on my little blog! I can’t quite articulate how happy/jubilant/gleeful/giddy that makes me feel, so instead I baked this celebration cake to send you all my love in the form of a four layered chocolate cake with velvety honeycomb buttercream, drizzled generously with dark chocolate ganache and a pile of smashed homemade honeycomb. Does this give you a better idea of how grateful I am? I actually went a bit over the top on the swiss meringue buttercream, those responsible for demolishing it did so with a bit of a groan…i.e. probably only pile on half as much buttercream as I did. But oh well, as far as life difficulties go, too much honeycomb buttercream isn’t really that horrendous.

I want to say a quick thank you to everyone who has viewed, shared, liked, commented on and baked from the blog. I get such a buzz every time I’m sent a photo of a recreation of one of my recipes, or when a stranger or friend says they’ve had a glance through the posts and photos. It’s what keeps me creating! I even splashed out and bought myself a new camera, and this recipe is its debut. I’m becoming that person that saves their money for cameras, photoshop software, flour, chocolate and cake boards. But that’s ok with me!

PS making honeycomb is ridiculously fun, it’s science at its best and most delicious. Definitely give it a go, you’ll feel like a bit of a mad genius. I couldn’t quite bring myself to cull anymore of the 142 photos I originally took, so enjoy having a scroll through until you reach the recipe…and have fun! 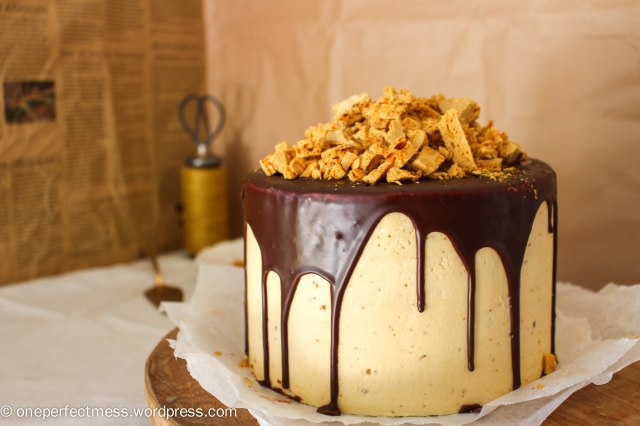 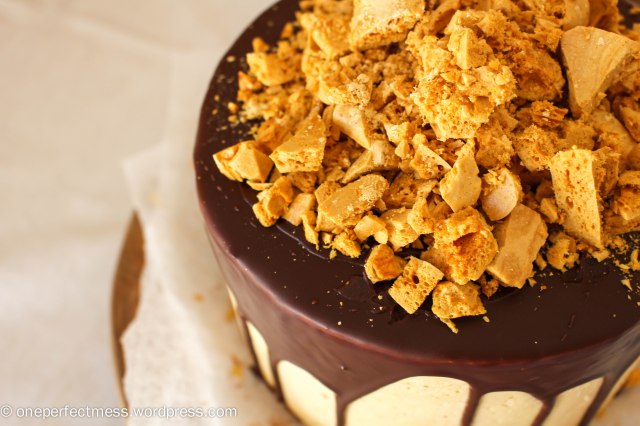 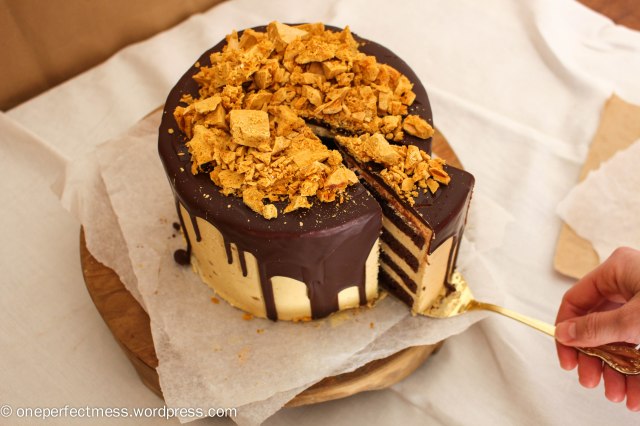 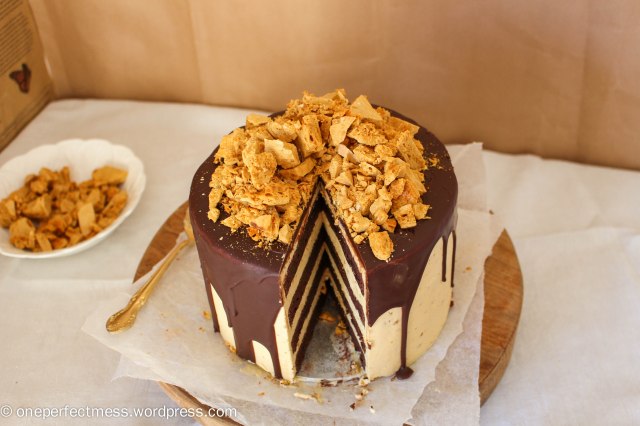 Total Time: 3-4 hours, plus an additional 1 hour at room temperature prior to serving

Honeycomb (must act like a ninja for this stage, so don’t get distracted)

Make sure the cake has been out of the fridge for at least 1 hour before serving, to ensure the cake and buttercream are soft and at room temperature.

Store the cake covered and refrigerated for up to 3 days, but best served within 1-2 days of baking.

Note: The cakes can be made up to 2 days in advance, and stored in an airtight container. Make the honeycomb on the day of serving, as it loses its crispness quickly. Swiss meringue buttercream can be refrigerated in an airtight container for up to one week, or frozen for up to 6-8 weeks, prior to the addition of the honeycomb. Before using it to frost your cake, allow it to cool to room temperature, then beat on medium speed using an electric mixture until it retains its silky, soft consistency. This can take up to 20 minutes, so be patient if the texture looks a little strange. Beat in the honeycomb. For ease, if possible prepare the SMB immediately before you frost your cake.

A beautiful creation by a budding young chef at Wednesday's #oneperfectmess baking class; a full day of sugar, giggles and glorious mess 🌟🌟🌟 #baking #cake #chocolate #honeycomb
A pretty little Peach and Pistachio Cake! 🍑🌿🍑With hints of lemon, almond and walnut, all ready to be baked on #oneperfectmess , genius flavour combo credited to @chloeborgas 🤓 Can easily be made #glutenfree #baking #cake #summer
Chocolate and Blackberry Naked Cake with Almond Buttercream, and a cascade of fresh flowers! 🌸🌿🌸 A commissioned 21st cake for the lovely @leah_moffat, hope you had a magical night 💕 #nakedcake #layercake #chocolate #celebration #baking #bake #instafood
Follow one perfect mess on WordPress.com