It’s starting to feel like Autumn. Right now, the streets are adorned with vivid crimsons and fiery golds, the air is crisp and laced with the scents of log fires and fresh rain, and the kitchen smells like warm hot cross buns. I’m getting ready to hibernate for a winter of baking, drinking tea, reading, lambing, going for long walks… I’m definitely a cold weather frog. And after months of no rain, dry paddocks and hungry sheep, winter couldn’t come sooner! This scrumptious cake holds the last of the season’s blackberries, and fed a gang of friends and family as we huddled by the fire last night. Three layers of fluffy white chocolate cake are held together by velvety swiss meringue buttercream, flavoured with fresh blackberries and white chocolate. The berries are a wonderful offset to the sweetness of the chocolate, and I had a lot of fun (in hindsight) experimenting with the ombre frosting effect…not as easy as it looks but definitely worth the challenge!

I’ve had a few people asking how I get the smooth finishes on my frosted cakes. The whole process is actually ridiculously enjoyable, it’s my favourite part of baking a cake! Some of the handiest tools I have in my kitchen for frosting cakes are my cake turntable, offset spatula and bench scraper, I feel like a bit of a pro when I use them and they make life so much easier. Here are some places where you can buy similar tools:

And here’s a great video that shows you how to use them.

I hope you enjoy the photos and have a go at this little recipe. Have a lovely day wherever you are in the world! 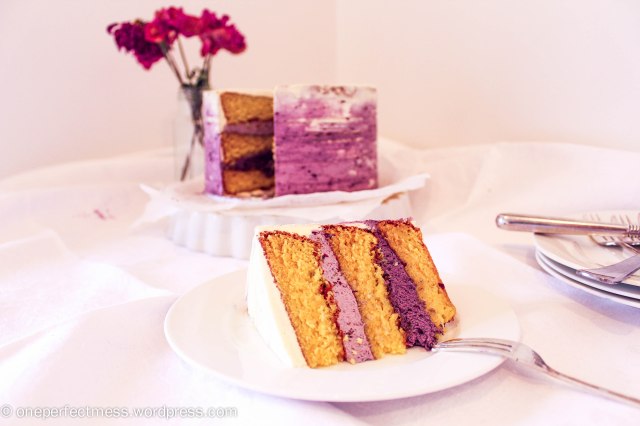 Store the cake covered and refrigerated for up to 5 days, but best served within 1-2 days of baking.

Note: Swiss meringue buttercream can be refrigerated in an airtight container for up to one week, or frozen for up to 6-8 weeks. Simply omit the blackberry puree before refrigerating or freezing the buttercream. Before using it to frost your cake, allow it to cool to room temperature, then beat on medium speed using an electric mixture until it retains its silky, soft consistency. This can take up to 20 minutes, so be patient if the texture looks a little strange. Once smooth, beat in the blackberry puree and away you go! For ease, if possible prepare the SMB immediately before you frost your cake. 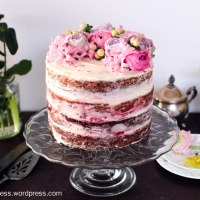